A passion for plants since 1932

Blue Mountain Nurseries of Tapanui was founded in 1931/32 by Stanley R. Hughes who immigrated to New Zealand in 1924 after attending Agriculture College in England. At first, the Nursery produced vegetables for local consumption but Stanley's first love was ornamental plants such as bulbs, perennials, alpines and trees and shrubs.

Stanley built up his business with the support of his wife Elizabeth (who immigrated to New Zealand in 1924 marrying Stanley in 1935). Their three children John, Denis and Judith all helped on the nursery during their teenage years and beyond.

Stanley was a keen collector and plantsman. He was known within New Zealand for the rare and unusual, as well as his skill as a plant breeder. Plant lovers from all over the country would visit Stanley to talk about and enjoy his plant collections. He was a member of many national and international horticultural societies as well as a fellow and a life member of the Royal Horticultural Society Great Britain. Stanley breed and introduced many plants – many of which are still available today – including...

Cut-flowers were first produced at the nursery in the 1930s and sold to auction markets and florists. Floral work was also an important part of Stanley's business where a local funeral could require up to 60 wreaths and sprays.

Ernest Hughes, Stanley's brother, was also a keen plantsman and plant breeder and lived at Millers Flat (Central Otago) where he grew bulbs and cut-flowers. Today his Narcissus cultivars have been incorporated into Blue Mountain Gardens bulb selections.

The nursery became a larger family business with John and his wife Irma, and Denis and wife Margaret each developing their own interests and expanding the business from 1966. At this time the nursery was split into two business units. John developed the bulbs, cut flowers and perennials in association with his farm (Formally owned by A.J.S. Winslade) as Blue Mountain Gardens. Denis developed the tree, shrub and retail outlet keeping the Blue Mountain Nurseries name. Stanley and Elizabeth in addition still operated the Florist business until Stanley's death in 1976.

Blue Mountain Gardens had streamlined the production of bulbs and cut-flowers by mechanising production making for a highly competitive production unit. The bulb harvester could lift 10 tonnes of bulbs per day. The Gardens sold their bulbs both by mail order and through wholesale outlets.

Cut flowers were a major part of Blue Mountain Gardens business where Tulips, Daffodils and Iris were picked from the field during September to February. Tulips are also conditioned in coolstores during summer and forced during winter months in greenhouses to provide cut-flowers out of season for the New Zealand market. Production of cut-flowers had increased considerably during the past 35 years with up to 80 cartons a week being sold in the 1970s to peaks of 400 cartons a week in the 1990s.

John and Irma Hughes retired in 2004 and the business was closed.

From the 1960's, Blue Mountain Nurseries has grown considerably from Stanley's three hectares and Denis and Margaret have developed the nursery significantly since 1966.  Today the nursery has 10 hectares in production and produces over 4,000 varieties of plants for national distribution to other nurseries, parks, landscapers, garden centres and gardeners throughout New Zealand. The nursery specializes in the propagation and growing on of hardy trees and shrubs, rhododendrons, azaleas, conifers, climbers, natives, perennials and pleione orchids.

The nursery today produces plants for national sale with 95% being sold outside of the West Otago area.  The nursery has a retail garden centre on site at 99 Bushyhill Street Tapanui.

Denis, like his father, has become a great plant collector. Rhododendrons became a passion for both Denis and Margaret with Denis producing the first plants of Rhododendron Crest in New Zealand and Margaret breeding City of Dunedin. (The feature plant for the 150th anniversary of Dunedin City).

The nursery is known for its rare and unusual plants due to Denis and Margaret's enthusiasm. The range of Deciduous Azaleas dubbed The Blue Mountain Azaleas and Agapanthus Blue Mountain are some of the latest additions to the plant list as a result of Denis' plant breeding programme. Other plants bred or introduced by Denis are;

A third generation of Hughes proudly works alongside Denis. Denis’s son, Chris, is at the helm of Blue Mountain Nurseries as General Manager supported by a team of between 10 and 18 staff members, depending on the time of year. Denis continues to provide information and guidance and works on future breeding programmes. 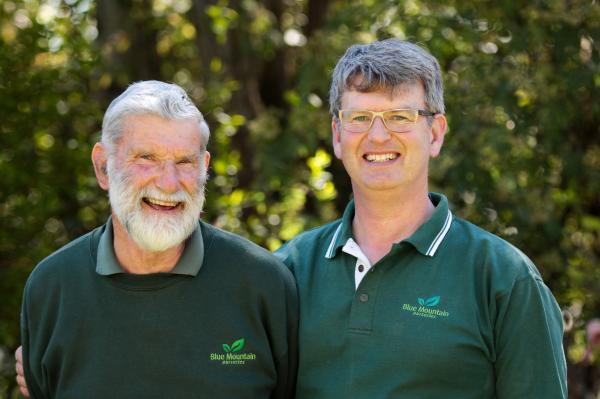