We have a vast range of Sophora trees. Read on for more details.

Grown from seed originating in Chilleu, Chile 1989. Seedlings do not show a juvenile stage and begin to flower at a relatively young age, after four years with us.

The trees form into an attractive, upright vase shape with arching branches. The leaves are an attractive deep green giving a healthy, vigorous look to the modest sized trees.

Flowering time is variable but usually occurs from mid-September to mid-October in the south. The flowers are the traditional shape but a little more flared at the mouth, while the colour is the usual gold. Our native nectar gathering birds:- Tuis and Bellbirds, find them most attractive.

In the past S. cassioides has been included in the variable species S. microphylla, which it closely resembles. When grown with other New Zealand species of Kowhai, S. cassioides hybridizes readily, especially when grown in close proximity and flowering times overlap.

This clone was selected by John Goldie of the Levin Horticultural Research Centre at the DSIR Botany Division in 1975 and 1977 and grown from this cutting material. The seed for this form was originally collected from Chepu in Southern Chile.

As it was considered an excellent form and an ideal ornamental tree it was initially distributed by D&D’s, and in a modest way by others for many years.

Over the past 30 years it has proven to be an excellent form of Kowhai and ideal in gardens and ornamental areas, but should not be confused with our native forms especially when doing re-vegetation work.

This forms into a bushy multi-layered bush with rather large leaves. The golden flowers appear in the early spring while the shape is notably flared at the mouth.

There are not many plants of this Kowhai growing in New Zealand, however there is one in the Christchurch Botanical Gardens. 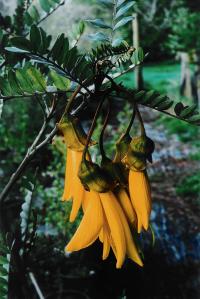 This species occurs on the western and northern North Island (northern Taranaki – Auckland and Northland).

It is speculated to have been shifted south to the Wellington / Kapiti area by Waikato and Taranaki Maori and from there to the Chatham Islands.

S. chathanica has no juvenile phase so flowering occurs quickly, (4-5 years from seed we collected on the Chathams).

They form neat upright trees of deep green foliage and have a free flowering nature.

This is a seed raised line from a superior tree of garden origin. It appears to me to belong with S. chathamica.

This is a form of S. chathamica that has a divaricating branch system and typical free flowering nature. Other names for this include S. Wiggie Wiggie (Blue Mountain Nurseries), Golden Twist (Plant Productions Ltd), and Twister (NikauGardens). S. Milligold and Jurys Weeping, and S. Te Atatu Gold appear to have a close alliance to S. chathamica and are probably hybrids of this species. 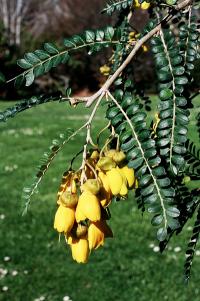 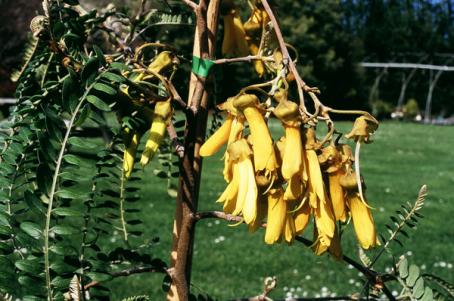 This species has a restricted distribution, typically the western Waitakari ranges, however it does occur from the Waikato north.

It has no juvenile phase and flowers at a young age, (7-8 years here). They form a neat, modest, upright, open vase shaped tree when young and have a grey green appearance. The leaflets are crowded together and are often overlapping.

S. fulvida is one of the most ornamental of all our Kowhai and deserves to be planted more frequently in gardens. Being from the northern parts of New Zealand, the colder areas are unsuitable for its cultivation.

While this species is little known in gardens, its large flowers occur late in the season, late October to November. Its small, neat stature should make it very popular.

The only named form I am aware of is S. fulvida Whatipu, a fine selection ideal for gardens from Pam & Peter Smale of Oaklands Nursery, Motueka.

This species is native to the Eastern Taranaki, Rangatiki, Wanganui, and Taihape areas.

It is distinguished from the other species by its plastered leaf hairs and often pointed leaves, especially noticeable on immature leaves. This species does not have a divaricating, juvenile phase and grows very quickly into an upright, bushy, pendulous tree. The rate of growth and quick flowering nature has endeared this form to Horticulturalists for many years. It is most commonly seen in gardens as S. godleyi Goldies Mantle, a very good weeping, grey green leaved clone.

This form has been grown in New Zealand for many years as S. Otari Gnome, and Gnome, under which it is still being distributed. If this plant belongs to the species howinsula time will tell as this name is still being debated.

The plant is relatively common in gardens throughout New Zealand and is quite distinctive with its short, bushy habit and lignotuber from which new water shoots arise from time to time. The large leaflets are reminiscent of S. tetraptera, however the shorter leaf and bushy habit make it quite distinctive. Like S. tetraptera, the flowers are large and quite long when compared with other species.

This comes true from seed but care should be taken as to what other Kowhais grow near by your stock plant, as a few hybrids are appearing in commerce.

Seedlings do not exhibit a juvenile phase but are of modest growth rate. The foliage is a softer or brighter green, very fine and relatively long.

The yellow flowers are paler than other species and have a greenish hue especially when just opening. The pedicel often has an unusual twist causing the flower to hang upside down.

This plant often forms a multi-stemmed tree and occasionally suckers but may be pruned to form the very dainty small tree which is well suited to the suburban garden.

This is native over much of New Zealand and at one time also included S. cassioides from Chile.

S. microphylla has a divaricating juvenile phase which may last in excess of 20 years. This is very noticeable from the Owaka area.

When mature they form into handsome trees with pendulous branches and individuals may be seen in flower from May to October.

Near Taihape, there are some very pendulous forms. As their geographical range overlaps with other species one often finds hybrids in the wild where this overlap occurs.

As this species occurs so widely in New Zealand this particular Kowhai can genuinely be claimed as our National Flower.

This species is native to the Cook Strait area both on the North Island and South Island including some of the off-shore islands, e.g. Stevens Island and Kapiti.

It forms into a low mat or bushy shrub depending on the exposure and locality. Flowering may be as early as May and continues through the winter months.

S. molloyii in cultivation was first selected by John Goldie of Levin Horticultural Research centre and distributed by D&D as S. Early Gold. This is still one of the earliest Kowhais to flower. These days the market is mainly supplied by a similar selection, also from Stevens Island, S. Dragons Gold.

In cultivation S. Molloyii grows much larger than it does in the wild and forms a large shrub or small tree. Also, the lush new growth tends to cover the flowers which are then hidden under the foliage.

This is native to the dryer, open areas of the central to northern parts of the South Island, where it grows into a wiry bush of strongly divaricating stems. When first seen in the wild one does not normally recognize it as a Kowhai. In the more open spaces it grows incredibly tight while in the more sheltered areas it forms a more open divaricating shrub. The flowers are relatively small and a deep orange colour scattered throughout the interior of the plant during October to November. From a gardener’s point of view this may not be the first choice of Kowhai to plant but I have seen some most interesting Bonsai plants. The only selected, named form I am aware of is S. p. Little Baby, selected and introduced by D&D.

This is our largest Kowhai, forming tall stately trees. While it is one of our better-known Kowhais, it is also frequently incorrectly labelled and many plants are of hybrid origin. The leaflets are large and oval shaped. While the leaves are also the boldest New Zealand species, perhaps only being confused with S. h. gnome, which are shorter in length. It is native to the east coast of the North Island, East Cape, and the Ruahine Ranges. The flowers are very long and hang in bold clusters. They are at their best from mid-October to November. Many trees lose their leaves just prior to flowering.

This hybrid forms a small, dainty, multi-stemmed tree with clusters of orange flowers.

Collected 10th May 2006 by the main road south of Cromwell by Denis Hughes. The tree is 3m tall and 2.5m wide. In full bloom on 10th May, the flowers are deeper in colour than others coming into flower and more flared at the mouth, being produced in great abundance.